Part 3 of the Star Wars action figure brochure features two popular toys from the late 70s, the X-Wing Fighter and the Death Star.
I had an X-Wing Fighter and believe me, it was great.  I always thought that the Death Star in the movie would have been an excellent playset too (even though it’s a kids toy with the word “Death” in its name), but this playset looks nothing like the Death Star in the movie.  I realize that replicating the movie’s Death Star would have meant creating a massive toy, but come on, the toy in the brochure is disappointing.  It’s got an elevator, a canon, and the trash compactor with “Trash Monster”.  Looking at the picture, I think any kid would get bored of the Death Star much sooner than they would with the X-Wing Fighter.
Anyway, no kids are being teased on this page of the brochure — but there will be in the final installment from the brochure (part 4).  More 2 come… 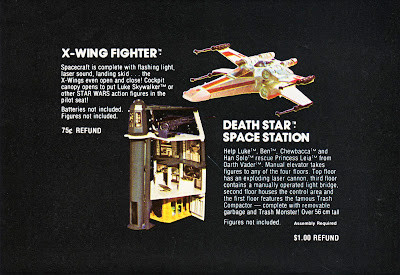