“Found In The Attic – One Of The World’s Great Zoos?”

The attached picture shows a brochure from the Toronto Zoo, and it’s undoubtedly from it’s earliest years.  The prices are $3 for adults, $1.50 for seniors & youths, and a whopping $0.50 for kids under 12.
The brochure proudly asserts that the zoo is one of the world’s greatest.  Sadly, not likely these days.  I’m not exaggerating when I say that the Toronto Zoo isn’t what it used to be, although it’s still entertaining, especially for kids.  I’ve been to the San Diego Zoo, the Bronx Zoo, and more, and I can comfortably say that the Toronto Zoo, in my opinion, doesn’t rank up there with those zoos.  I would be thrilled if the Toronto Zoo could get much more $ and improve itself, but in these times that doesn’t seem likely.
The brochure asserts that “Noah would be pleased!” and then mentions the rolling woodland countryside, the five breathtaking glass pavilions, and the 4000 animals from around the world.  It also loudly proclaims “Just 30 minutes from City Hall!”. Back in the late 70s that was probably true, but today you might have a tough time getting there in under an hour and 30 minutes (DVP, I’m looking at you)!
Finally, the brochure mentions the climate-controlled train that takes you around the zoo.  If you’re old enough, you’ll remember the monorail that once gave the Toronto Zoo a futuristic feel.  It’s a shame that the monorail is no more. 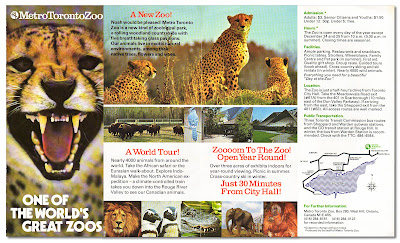